Mobile crowdsensing (MCS) presents a new sensing paradigm based on the power of user-companioned devices.11,12 It allows "the increasing number of smartphone users to share local knowledge acquired by their sensor-enhanced devices, and the information can be further aggregated in the cloud for large-scale sensing."4 The mobility of large-scale mobile users makes MCS a versatile platform that can often replace static sensing infrastructures. A broad range of applications are thus enabled, including traffic planning, environment monitoring, urban management, and so on.

During the past decade, MCS has become a surging research topic in China. There are several reasons that precede this new sensing paradigm:

The term "mobile crowdsensing" was coined in Ganti et al.'s work14 in 2011. In 2012, Yunhao Liu from Tsinghua University gave a thorough characterization of the definition for the first time, noting research challenges as well as MCS opportunities.11 Huadong Ma et al. from Beijing University of Posts and Telecommunications (BUPT) proposed several new metrics (for example, opportunistic coverage) to characterize the sensing opportunity and quality.12 The team led by Zhiwen Yu at Northwestern Polytechnical University (NPU) gave a thorough review of the challenges, the architecture, novel applications of MCS, and proposed the Visual Crowd-sensing (VCS) concept,3,4 which leverages built-in cameras of smartphones to attain informative/visual sensing of interesting targets. Tsinghua University and Shanghai Jiaotong University (SJTU) systematically study the general incentive mechanisms in MCS,6,20 as it is important to have the active participation of citizens. Zhang et al. from Peking University investigated Sparse Mobile Crowdsensing,16 which leverages the spatial and temporal correlation among the data sensed to reduce the required number of sensing tasks allocated.

Key applications and beyond.

Besides scientific investigation, many novel MCS applications (as shown in Figure 1) have also been developed in China to address the societal and developmental issues in different domains. 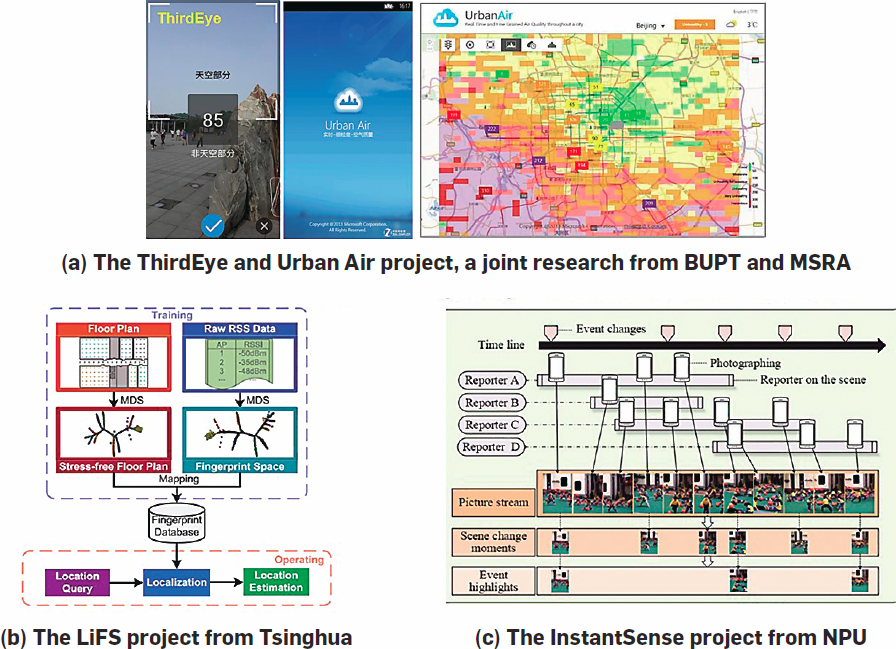 MCS is a human-centered sensing paradigm, but some places are not accessible for human beings. In recent years, with the development of IoT and edge computing techniques, there are more pervasive devices equipped with sensing and computing capabilities. With the integration of these capabilities, the next-generation MCS (MCS 2.0)—Heterogeneous Crowdsensing (HCS)—is proposed. There are several distinctive features that characterize HCS (as shown in Figure 2).

Augmented intelligence. A distinctive feature of HCS is that both human and machine participation is involved in the large-scale sensing process. The coexistence of human intelligence and machine intelligence, however, must be orchestrated in an appropriate and optimal manner to enhance both.

MCS is heading toward the HCS generation, and there are several enabling techniques that help achieve this goal.

Energy-efficient collaborative sensing. MCS 2.0 leverages pervasive devices as additional participants for crowdsensing. However, energy concerns for such resource-constrained devices are emerging regarding their limited power supply and high computational needs.15 To address this issue, collaborative sensing becomes an important technique. There are currently two major methods under investigation. The first method eliminates the dependency of on-device batteries by mingling heterogeneous energy-harvesting mechanisms to harvest energy from surrounding objects.2 The second way is to replace traditional energy-consuming sensors with energy-efficient sensors regarding the spatio-temporal dependencies.8

Hybrid human-machine intelligence (HHMI). In 2017, the Chinese government issued the AI 2.0 plan.13 According to the plan, breakthroughs should be made in several basic theories of AI, including the hybrid human-machine intelligence (HHMI). HHMI aims to integrate human intelligence into an AI system to complement machine capabilities throughout its life cycle. However, the implementation of HHMI is still being explored. First, a set of theory is required for defining human and machine functions and characteristics. Second, criteria should be set to estimate the opportunity of human-machine cooperation during the continuous learning cycle. Third, the evaluation methods of the HHMI system from the perspective of both humans and machines is also an important but difficult issue. As a representative case of HHMI, a human-feedback identification model is proposed,19 which can continuously update the tree-based incremental learning model with human guidance.

HCS aims to build an extended sensing and computing space with heterogeneous participants, including humans, machines, and environmental sensors.

Operating system for crowdsensing. Regarding the vast crowdsourcing field, Amazon Mechanical Turkf has become the most successful online crowdsourcing company in the world. The core of it is a generic framework that supports various online crowdsourcing tasks (for example, translation and image labeling). Different from online crowdsourcing, MCS represent unique features such as spatio-temporality and pervasive sensing. To support rapid design and development of MCS applications in different domains, numerous platforms and frameworks are emerging. Existing MCS platforms usually address specific issues from a certain perspective, and different platforms are not compatible with each other. In 2019, researchers from NPU in China addressed this issue by drawing on the idea of ubiquitous operating systems (OS) and proposed a novel OS (CrowdOS 1.0),10 which is an abstract software layer running between the native OS and the application layer. Based on an in-depth analysis of the complex relationship among crowdsensing tasks, participants, and data, they built the OS kernel with three core modules: the Task Resolution and Assignment Framework (TRAF), the Integrated Resource Management module (IRM), and the Task Result Quality Optimization (TRO) module.

To meet the new characteristics of MCS 2.0, a new version of CrowdOS is being developed, to deal with the new challenges such as heterogeneous resource management, scheduling, and collaboration, as shown in Figure 3. The 2.0 version further enhances the platform's compatibility and extendibility for heterogeneous MCS. As an open source MCS platform, CrowdOS shares the application installation packages, related algorithm modules, source codes, and various project documents from its website (www.crowdos.cn). To date, there have been more than 20,000 visits from 20+ countries. Based on CrowdOS, we are now collaborating with researchers from around the world (for example, Rutgers University in the U.S., Ulster University in the U.K., Waseda University in Japan) and Trustieg (the biggest open source software community in China) to launch an open source competition on innovative MCS applications. This is believed to be the first competition on open source MCS software development over the world. 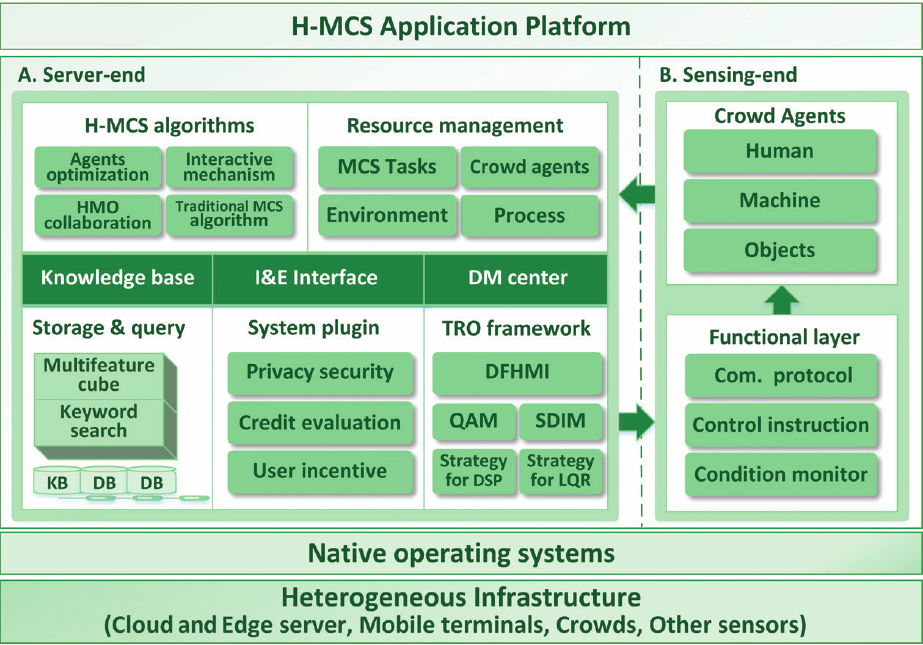 Though we have witnessed significant development of MCS in China in recent years, there are still several issues to be tackled to further promote its growth in the MCS 2.0 era.

Strengthen the theoretical foundation. Though MCS has received much achievements at the technological level, the theoretical foundation of it is largely lagging behind. The basic scientific issues, such as the emergence of crowd intelligence (that is, the wisdom of crowds), crowd cognition mechanisms, and hybrid human-machine intelligence, are still not sufficiently explored. Therefore, one fundamental task is to study these theoretical problems and using the mechanisms/principles to improve MCS technique development.7

Embracing new technologies. The future of MCS must be aware of new technologies and applications. The emergence of AI, AIoT (AI in IoT), and Blockchain brings new opportunities and benefits to MCS. For instance, AIoT leverages compression and edge-intelligence methods to enable the usage of deep learning algorithms in resource-constrained devices.21 Blockchain, however, paves the way for trust and secure interaction among independent agents.5,18

Deployment of killer apps of MCS. MCS is still limited to a supporting role in China and not placed in a dominate position to deal with major developmental issues. By aggregating the benefits of human, machine, and IoT devices, the next generation of MCS will present grand opportunities in key national economical areas such as smart industry and social governance. Therefore, the Chinese MCS community should maintain close collaboration with industry researchers and government managers to investigate killer MCS apps to be deployed.

Mobile crowdsensing has rapidly developed in China during the last decade. The pervasive use of smart/wearable devices as well as the large-scale sensing requirements from different fields drives its development. Numerous enabling techniques are explored or being developed, including task allocation and worker selection, incentive mechanisms, crowdsourced data management, privacy/security protection, as well as collaborative sensing and human-machine intelligence. The availability of a generic crowdsensing platform such as CrowdOS also facilitates the research and development of MCS applications. Recently, the Chinese government released the "Fourteenth Five Year Plan and the 2035 Vision of China," where the development of "Digital Economics" and "Digital China" has become a core mission. MCS is expected to play an important role in the coming digital economics era.

Huadong Ma is a professor at Beijing University of Posts and Telecommunications, Beijing, China.

Zheng Yang is a professor at Tsinghua University, Beijing, China.

Permission to make digital or hard copies of part or all of this work for personal or classroom use is granted without fee provided that copies are not made or distributed for profit or commercial advantage and that copies bear this notice and full citation on the first page. Copyright for components of this work owned by others than ACM must be honored. Abstracting with credit is permitted. To copy otherwise, to republish, to post on servers, or to redistribute to lists, requires prior specific permission and/or fee. Request permission to publish from permissions@acm.org or fax (212) 869-0481.

The Digital Library is published by the Association for Computing Machinery. Copyright © 2021 ACM, Inc.

Hospital Robots Are Helping Combat a Wave of Nurse Burnout